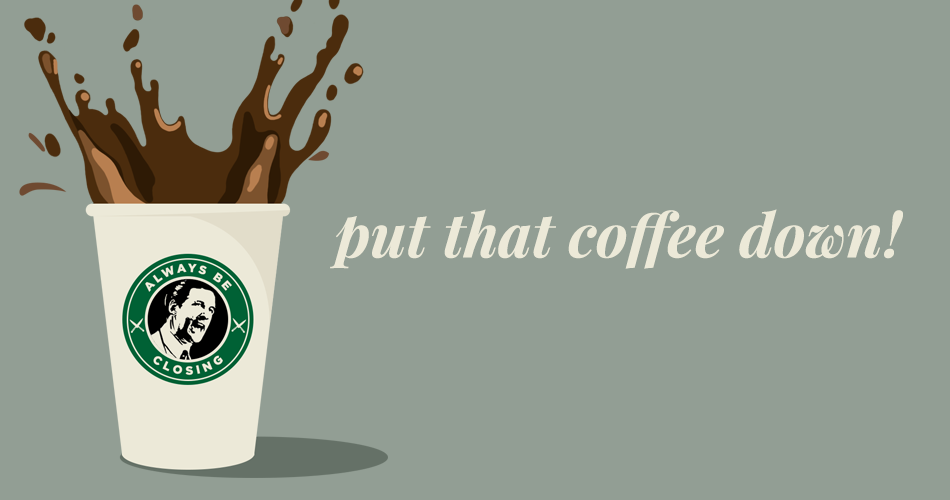 Are you missing the life lessons in the Glengarry Glen Ross quotes like “always be closing” and “coffee’s for closers” you’ve been hearing—and using—for years?

You’ve probably quoted it— even if you’ve never seen the movie.

You hear echoes of this speech all the time. Lines from the speech like “coffee’s for closers” have become every bit a part of our culture as famous lines from other movies like “make him an offer he can’t refuse.” The latter is from The Godfather, the highest grossing movie of all-time for years after it’s release, a movie that millions of people worldwide have seen, and that influenced a whole slew of box office and television hits.

“Coffee’s for closers” is a line from Glengarry Glen Ross, a movie that might best be described as a “cult classic” and that, despite critical acclaim, lost money. How could one scene from such a relatively small movie make such a big dent in culture? The answer is simple: IT’S AMAZING!

It’s amazing because the scene sets a lot of the movie’s action in motion, tells us about the characters and includes a bone-chilling speech delivered by Alec Baldwin with the fervor of the best fire and brimstone preacher. That’s what makes it so enduringly quotable. But before you throw a “you see this watch?…” or a “third prize is you’re fired” or any other Glengarry Glen Ross quotes out there in jest, take a deeper look at this masterwork (and subscribe to The Compass for more important advice). For all its funny, workplace-inappropriate and downright abusive content, the speech is chock full of life lessons.

If there is one iconic line from this movie, this is it. Of all the Glengarry Glen Ross quotes, this is the one that gets the most attention. Humiliating Jack Lemmon’s character by denying him the right to drink the company coffee in front of the rest of the team is the ultimate power move, but using this approach on yourself can work wonders.

The technique is simple: set micro-goals, with small rewards. If you love coffee and you’ve got a task in front of you, pick off a segment of the task and deny yourself coffee until you accomplish it. The urge to get to that coffee break can be just the push you need to knock out more tasks and be more productive everyday.

The leads are weak?“You’re weak!”

This quote is simply a rephrasing of an old saw, a carpenter never blames his tools. Granted, the rephrasing is mean-spirited, but the point is the same. When your inner voice starts to complain about not having the best tools for the job, remembering this line can light the fire of ingenuity under your ass so that you find a solution. After all, you may be right. You may be understaffed, under-equipped or under-resourced in some other way, but unless you have a feasible solution to the problem, complaining about it makes you sound…well…weak.

This line probably gets so much play as a punchline it’s hard to remember that it was once an actual piece of advice. Hackneyed as the line is, it encapsulates a great lesson in being single-minded. The Baldwin character’s point is that everything you do should be in service of some overarching goal. A salesman’s mission may be to sell, so he looks at every conversation as progressing towards a sale. But what if you have a personal mission?

Let’s say your goal was to become a better public speaker. Then “always be presenting” can give you a new outlook. When you’re speaking to a cashier at the drugstore, you’re practicing enunciation, when you’re relating a story about your commute to your co-workers, you’re working on using your hands to convey information. No matter what you’re doing, reminding yourself to always be improving is always a good idea.

“You see this watch?
This watch cost more than your car.”

Throughout the speech Ed Harris’ character keeps pressing him to explain who he is, but Baldwin’s character never gives a straight answer. When asked why he’s there to talk to them, Baldwin responds with this line about the watch and telling Harris’ character how much money he made in sales last year.

While judging yourself on your possessions or how much money you make is nothing to shoot for, the underlying statement Baldwin’s character is making here is you are what you do. His answers to Harris’ character’s basic question, who are you?, may seem evasive, but, in fact, they are the answers that are most consistent with his character. He doesn’t see himself as a noun but as a verb. Try thinking of yourself as a verb for a day and you’ll see how impactful this is on what you choose to do. Let’s say your goal is to get fit. Most guys would express this as wanting to go from out of shape to being in shape. And most guys don’t do jackshit about it, it’s a wish. But if you subscribe to the philosophy that you are what you do and you really want to get fit, then choosing working out over vegging out is a pretty straightforward decision. By thinking of yourself as your actions, you constantly hold yourself accountable to your own goals.

By now you’ve gotten a sense of how one of the most vicious tirades in cinematic history contains great insight and inspiration (and is damn entertaining as vicious tirades go). These are just our top choices. What about you? Tell us which lines resonate with you from this scene and why in the comments below.

13 thoughts on “Glengarry Glen Ross Quotes – Put That Coffee Down!”