A Guide to Understanding The 3 Types of Suit Vents 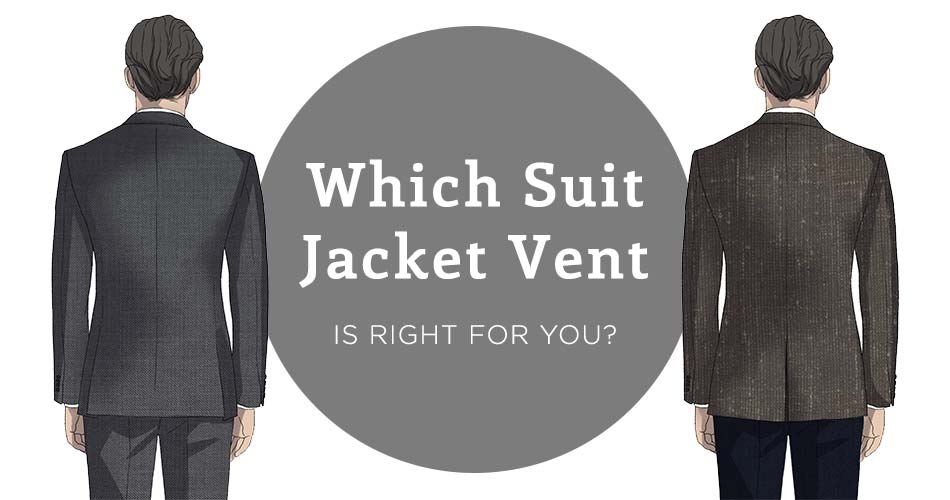 Which Suit Jacket Vent Is Right For You?

The suit maketh the man and the details maketh the suit. From the buttons to the lapel types to the pockets, it’s been well documented that the front of a suit jacket is rich with opportunities to make choices that add a personal touch. On top of its potential for customization, the front of the suit is the part you most often see when admiring your dapper self in the mirror and in photographs. But that’s just you. Other people have to look at the back of your suit too. And there’s a key design feature in the back that deserves a bit of your attention, specifically, the part covering your derrière: suit jacket vents.

What Are Suit Vents?

For the uninitiated, a suit vent is a vertical slit that extends upward from the bottom hem on the backside of a suit jacket or blazer.  (If you need to, learn the differences between a suit jacket and a blazer.)

Suit vents became a distinguishing feature on jackets back when gentlemen in polite society spent their leisure time enjoying equestrian pursuits. While riding their trusted steed, these additional openings in the jacket allowed for ease of movement and greater comfort in the saddle. The separation created by these openings also helped the jacket drape more gracefully over the sides of the rider’s hips, rather than bunching or creasing around the seat.

Today, few among us are suiting up for this high society purpose, but your choice between the types of suit vents remains a staple decision in traditional tailoring. Their functional purpose remains largely unchanged: suit vents reduce the feeling of constriction while moving or sitting, prevent the fabric from bunching, and offer smooth access to your pant pockets that don’t mar the lines of the jacket when you go fishing for loose change.

Why Does The Jacket Vent Matter?

Much like suit pant breaks, some personal preference is involved in selecting the vent style for your jacket. Suit vents commonly appear in two configurations: a single, centered vent or double-sided vents (there’s a third no vent option on certain jackets, but let’s leave that aside for now).

You could, in theory, simply pick the look you personally find most aesthetically pleasing and strut off into the sunset. That would be a rookie move because as is so often the case in the world of suits, there are threads of meaning sewn into every choice you make.

The 3 Types Of Suit Vents

Your answer to the age-old “Center vent or double vent?” question can signal whether you’re a more modern or a more traditional gent. A discerning eye might also see it as an indication of the provenance of your suit. Though honestly, the choice between the type of suit vent to choose mostly comes down to the fact that different styles flatter different body types, and fit (especially how your suit should fit) is king — this we know. 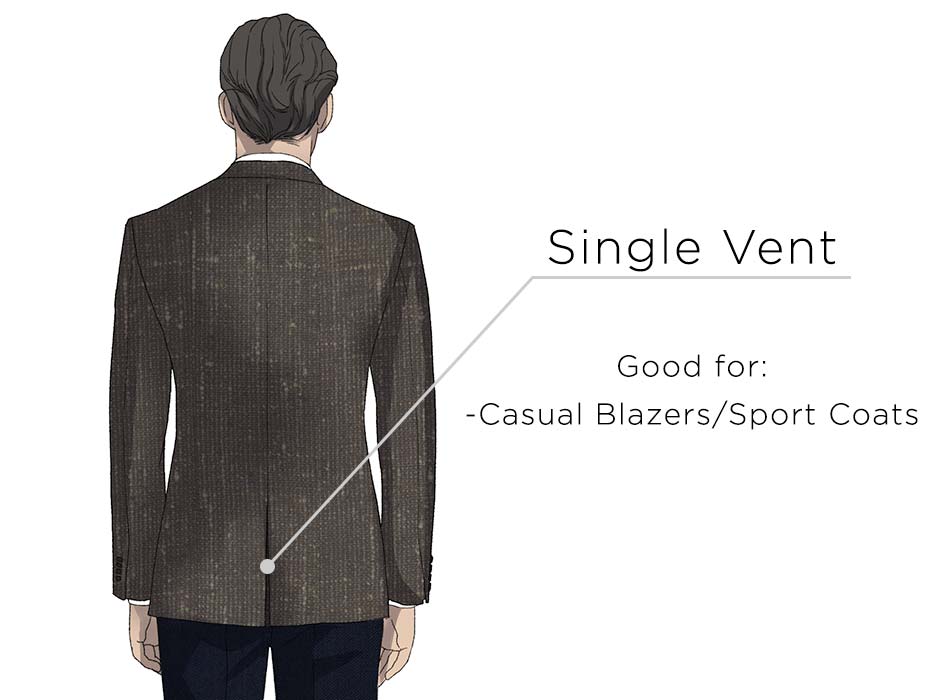 A single jacket vent sits directly in the center back of the jacket hem. Since gaining popularity with Ivy League types in the mid-20th century, the single jacket vent is often considered the ‘American style’ and is very common among the American workplace, particularly among baby boomers and older gents. It can also be found on more casual blazers given its simpler aesthetic.

The case for the single vent begins with availability. It is more readily available off-the-rack, as a jacket with a single vent is faster, easier and less expensive for mass market manufacturers to make.  As far as fit and aesthetic, its omnipresence means a single vent can be the more comfortable choice for guys who aren’t used to dressing in attention-getting styles. Single vent jackets will also be more flattering for the larger man, or more specifically, the man with extra junk in his trunk as side vents can flare out in ways that some consider distracting.

Our Verdict: The single suit vent is an all-purpose style that can look sharp as long as the fit is right on the rest of the suit, but it won’t impress the dandy set. It can be appropriate on a more casual blazer. 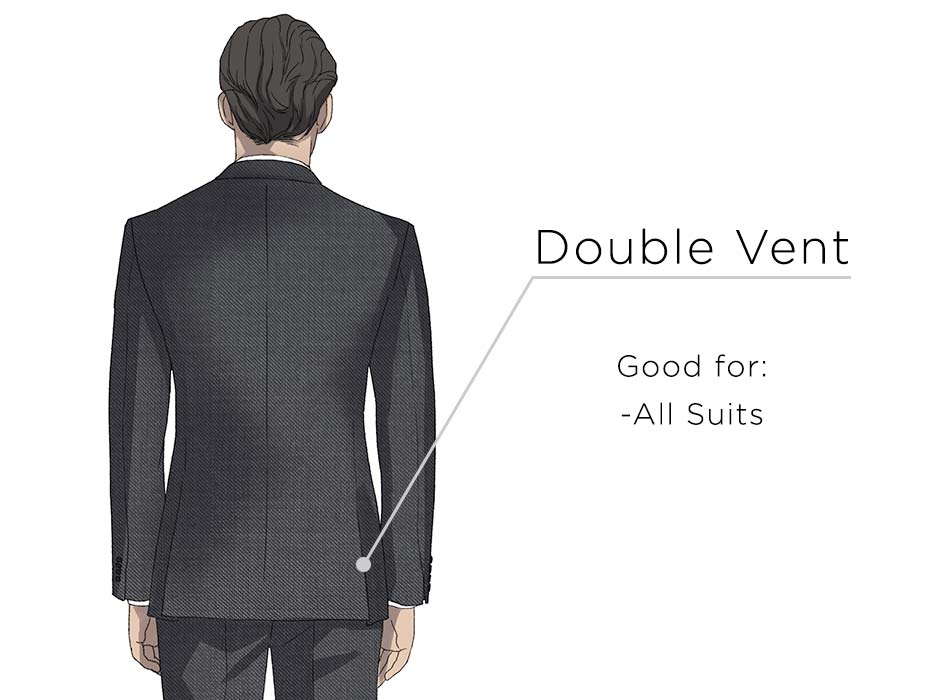 The double jacket vent (or side vents) features twin openings that sit on each side of the jacket’s back hem.

Suits with double jacket vents are commonly associated with British tailoring lineage, giving the wearer a more sophisticated and European flair in their style. Double-vented jackets naturally require more time and more cost to produce. As such, they tend to be found more frequently on made-to-measure or bespoke suits as well as occasionally, on premium ready-to-wear suit brands.

This air of exclusivity makes the double vent an ideal choice for the guy who wants to stand out and be seen as style-savvy. Most body types, other than the one mentioned above, will find this style flattering.

Our Verdict: The double jacket vent is a more sophisticated and stylish option and is our preferred look for most gents here at Black Lapel. 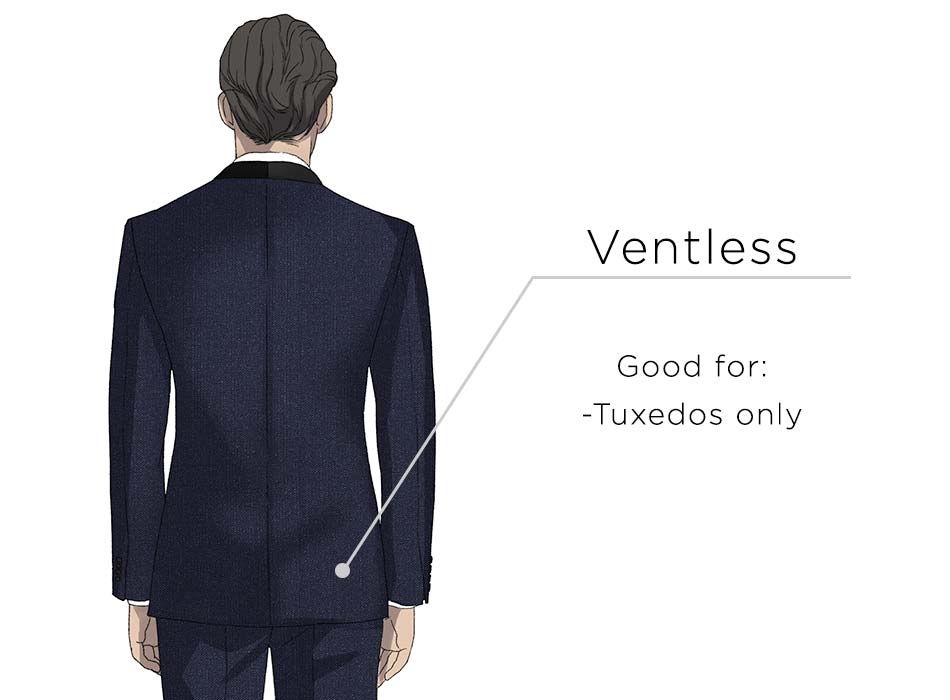 Now to reveal what’s behind door number three. The third and final suit vent option is not much of an option at all — a ventless jacket.

The vent-free jacket features an unbroken silhouette that is only ever appropriate with formalwear. Specifically, on the backs of a tuxedo jacket. Brush up on the differences between a tuxedo vs. suit jacket to learn more about why this is the case.

Our Verdict: The ventless jacket is a handsome and classic choice for black tie and only black tie.

Now that you know the types of suit vents available and how to choose between them. So, you can rest easy knowing the back of your suit looks just as good as the front.

Have any suit vent questions we didn’t cover? Drop a comment below and we’ll get back to you with an answer! Or just say hi, we like that too.