3 Work Pranks That Won’t Get You Fired… 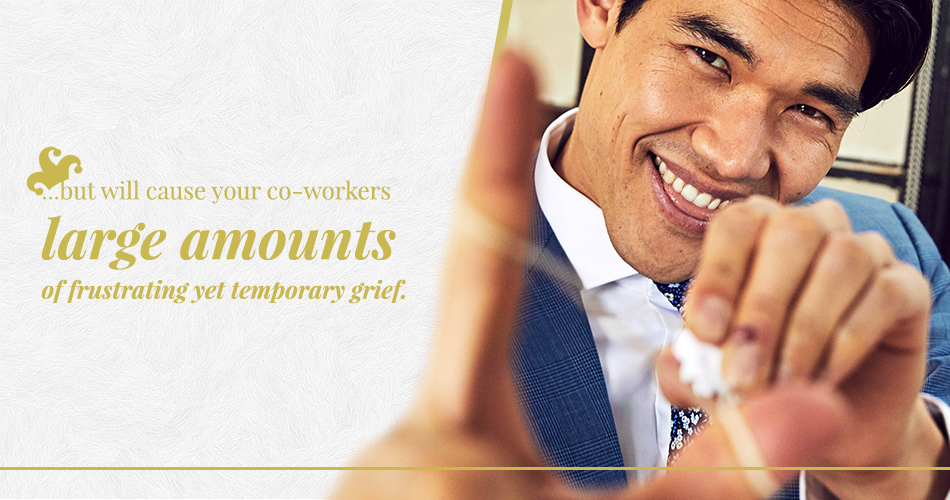 With April Fool’s Day coming up, we’re getting into the office pranks spirit. We thought we’d offer you a list of the wildest April Fool’s jokes for work.

Then we saw what those office pranks required and it seemed like a hell of a lot of time and effort to do something that could easily end up getting you fired.

So because we know you A) aren’t interested in getting fired, B) don’t want to run the risk of getting sued and C) don’t have time for elaborate planning, we came up with our list of three pranks that thrive on their low-key subtlety.

Don’t get us wrong. These pranks still pack a punch. They just do it in an understated way. And because these office pranks are harmless, they don’t just make good April Fool’s Day jokes, they’re a good way to have fun at work any day of the year.

So even if the calendar reads April 2nd, you can still pull one of these pranks just because. But enough build up, it’s time to get your mischief on.

We’ve all walked into an office bathroom only to find a full house. But what if just one stall were occupied all day? That’s the essence of this prank.

Elevate bathroom humor to the cerebral with this sightly gag. Set up one stall to look like the same person has been sitting on the toilet for waaaaaaaaay longer than normal. Then pull the pin on this prank grenade with a seemingly offhand comment. Here’s how it works:

Step 1. Bring a pair of jeans and a pair of shoes to the office in a gym bag.

Step 2. Slip, unnoticed, into the men’s room with your bag. Step into the stall that’s most visible to someone entering the bathroom and set up.

Step 3. Put the shoes down with the toes pointed away from the toilet bowl as if someone were sitting on it. Then, with the toilet lid down, place the jeans on top and arrange the pant legs to appear to contain an actual person’s legs. (Optional) Leave an “April Fool’s” note on the top of the jeans’ waist.

Step 4. Exit the stall, leaving the door closed behind you. You don’t need to lock it (in fact, rigging that and then being able to unlock it is sort of a hassle), just give the illusion that someone needs their privacy in there.

Step 5. When a sufficient number of staff members have used the men’s room, start asking questions like Who’s that in the john? or Has anyone checked on that guy in the bathroom? He’s been in there all day.

Depending on the size of your office and the setup of your bathrooms, this one can be set up and enjoyed in an hour or go on all day providing you with hours of entertainment as awkward conversations abound in your office.

Sure you could go through the trouble of encasing a stapler in Jello a la The Office, but that’s pretty extreme. There’s a much simpler way to prank someone who uses their stapler regularly.

Essentially this prank is just breaking someone’s stapler, but the beauty of it lies in how unbroken the stapler seems. When tampered with properly, the stapler will look and feel normal, but it won’t perform. The mark will press down and no staple will come out. The mark will check the stapler and find plenty of staples in working condition, yet the staples will stubbornly refuse to leave the safety of the stapler. Here’s how you make it happen:

Step 1. Bring a pair of small pliers to the office when you want to perform this prank.

Step 2. When your mark is not at his/her desk, snag the stapler.

Step 3. Open the stapler as if you were going to reload it. You’ll notice a small blade in the top half of the stapler. This is what pushes the staple down and makes the whole mechanism work. Grab it with the pliers and bend it so that it doesn’t line up with the staples. When you close the stapler, the blade will stick out like buck teeth.

Step 4. Replace the stapler with plenty of staples in it.

With the trap set, you’re ready to enjoy. But since this is a trap prank, this little bit of mischief is unscheduled so you have to keep your eye out to see it in action. You can, however, throw a little fuel on the fire by storing the stapler by a printer.

Bonus points, with most staplers you can easily repair the mechanism (though you should be prepared to replace the stapler to be on the safe side) and publicly use it minutes after others have failed.

We’ve all seen the candles that can’t be blown out gag. That’s the problem. It’s been done to death. So when you do that prank the best you can hope for is a “very funny guys” and a polite chuckle.

Pretty weak, right?  That’s why we suggest you do it.

Huh? That’s right, this rather hackneyed prank is the perfect setup for the real prank.

After the minor inconvenience of the candle gag, your mark will let his/her defenses down. Then you simply hand them the knife to cut the cake which you have made from an actual sponge.  Here’s how to pull it off:

Step 1. Get yourself a large car washing sponge. The bigger the better, since you want it to look like a real cake.

Step 3. Add a few sprinkles or other garnishes to make it look like you really put some effort into this cake.

Step 4. Talk up the effort that went into making this cake yourself. Or, if that would be out of character, make up a story about how you found this great bakery in your neighborhood and you had to bring one in.

Unlike the office pranks listed above, you can plan on this prank happening at a specific time. No April office birthdays to celebrate? Make up the occasion. Who doesn’t love a “We just met our Q1 numbers” cake?

One final note. Don’t ruin somebody’s birthday. Supply a real cake after the prank is revealed and you’ve all had a good laugh. Otherwise, the laughing will end and you’ll be looking at someone you just tricked into looking dumb who happens to be holding a large knife.