The Compass  /  Style  /  How to Wear and Care for Linen Suits

How to Wear and Care for Linen Suits

Linen Suits: An In-Depth Guide To Owning The Look

Choosing what suit to wear is easy when the mercury drops and you can layer up. Simply throw on your favorite wool or wool-flannel suit and you’re instantly smart and seasonally appropriate. But in the summer? That’s a different animal. When temperatures soar, heavy wool suits just aren’t going to cut it, and even all-seasonal suits can begin to feel stuffy. You might just start to think about sequestering yourself in the air-conditioned indoors until fall, but wait, there’s a solution.

Those who would write off the idea of chic summer dressing entirely have forgotten one of the season’s most enduring staples: the linen suit. Thanks to its lightweight breathability and its carefree casual vibe, the linen suit is a menswear icon not to be ignored. But before we hail the savior of summer style, let’s go over what makes linen such a great summer suit fabric, and how to wear a linen suit properly.

Linen is a natural textile produced from the fibers of the flax plant (aka Linum usitatissimum, to your Latin-speaking friends). Evidence suggests humans have been turning flax into the fabric for over 30,000 years, making everything from table coverings to priestly vestments. The earliest records of an established linen industry are 4,000 years old and from Egypt, where linen was used regularly for clothing due to the region’s extreme heat, as well as for mummification and for burial shrouds. If it was good enough for desert-dwelling ancient pharaohs, it’s good enough for your summer suit wardrobe.

5 Reasons Why Linen Is The King Of Summer Fabrics

There are several reasons why linen earned a prominent spot in the pantheon of summer fabrics. The benefits of linen clothing are numerous. We chose five to highlight, ranging from its nearly magical cooling abilities to its durability under pressure.

It’s lightweight. As in, literally, light in weight. Wearing linen during the summer will help you avoid the sweat-fest you would endure wearing heavier materials in the heat. This attribute is part of why linen is so prone to wrinkling, but don’t worry, that’s part of the shtick and there’s almost no way to prevent wrinkles from happening (though there is a way to reduce them… read on).

It’s cool. Linen has relatively high conductivity, meaning it helps transport heat away from your body so you stay at a comfortable temp.

It’s breathable. Linen’s lower thread count and loose weave allows more air to pass through the fabric to increase circulation. This permeability helps to cool your body down as it battles against the soaring temperatures.

It’s hygroscopic. That fancy word means linen absorbs moisture without leaving the fabric feeling damp or clammy. So, if your sweat glands tend to get the better of you, linen has your back (if you even crack a sweat wearing it.

It’s resilient. Though it looks delicate, linen is remarkably durable and resistant to abrasion. And, when cared for properly (keep reading), linen has impressive longevity.

How To Wear A Linen Suit

Comfortable, cool, and perfect for the dog days of summer, owning a linen suit is a no brainer, but at the same time, linen suits can cause confusion with some men due to their stylistic differences. To help you navigate the world of linen suits, let’s first break down the fundamental elements of linen suits, where you can wear one, and finally how to care for your linen suit to ensure it lasts.

Okay, great, so we know why linen is such a great summer fabric, but how does it fare as a suit? Well first, let’s cover an important subject surrounding the composition of linen suits — 100% linen vs. linen/wool blend suits. Out in the wild, you’ll find a good mix of both (you’ll also find other blends, but let’s stick to wool/linen as they’re the type we’re ready to endorse).

A truly 100% linen suit will typically be made soft, unconstructed (meaning little or no canvassing on the inside of the jacket, and with little to no shoulder padding. This plays up the relaxed look and casual nature of a linen suit but immediately restricts any hopes to dress it up for a more professional setting. A 100% linen suit will also be lighter and more permeable as it’s composed entirely of this open-weave fabric. 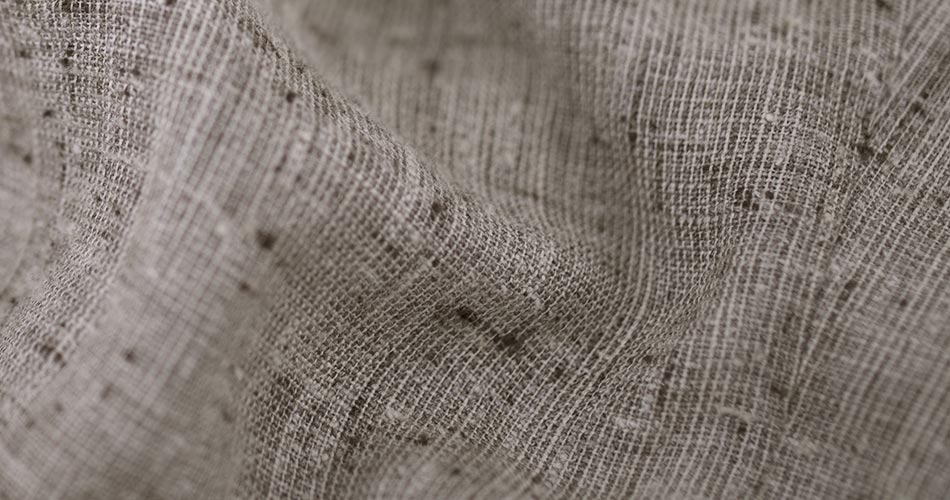 A close-up shot of a linen blend variation at Black Lapel, composed of 20% linen and 80% silk.

Although these points sound ideal, they also come with a cost when it pertains to your suit. The weightlessness will mean below-average drape, and the shape of your suit will slowly deteriorate as there is nothing on the inside to help maintain its structure. Finally, a 100% linen suit will wrinkle aggressively — seriously aggressively. Yes, this is the nature of the beast with linen, and as we said, it’s kind of linen’s “thing”. However, when it comes to suits, it’s fair to want to reduce the amount of wrinkling to try and preserve a polished look.

A close-up shot of our linen blend at Black Lapel, composed of 25% linen and 75% wool.

Linen blend suits are just as advertised, they’re made from linen blended with another fabric, typically wool.  At Black Lapel, we favor our linen blend variation (25% linen, 75% wool) for a few reasons.

So, what colors do linen suits come in? Imagine the quintessential linen suit and you probably picture a light shade, like khaki or eggshell. Linen indisputably looks great in light, summer-ready colors, but don’t be afraid to experiment with the dark side. Gray and blue also look great and can make your linen suit more office-appropriate. For those who want to go all-in, a baby blue linen suit like the one in the image above can, and will, make a statement.

How It Should Fit

You won’t be surprised to hear that you need to nail the fit. It’s a topic we return to constantly (it’s kind of our thing), and for good reason. No matter what fabric your suit is made from, it has to fit you before it will look good on you.

This topic is complex, and if you want the in-depth answer, we implore you to check out our guide on how a suit should fit. For those who’d rather opt for CliffsNotes, the main points are: 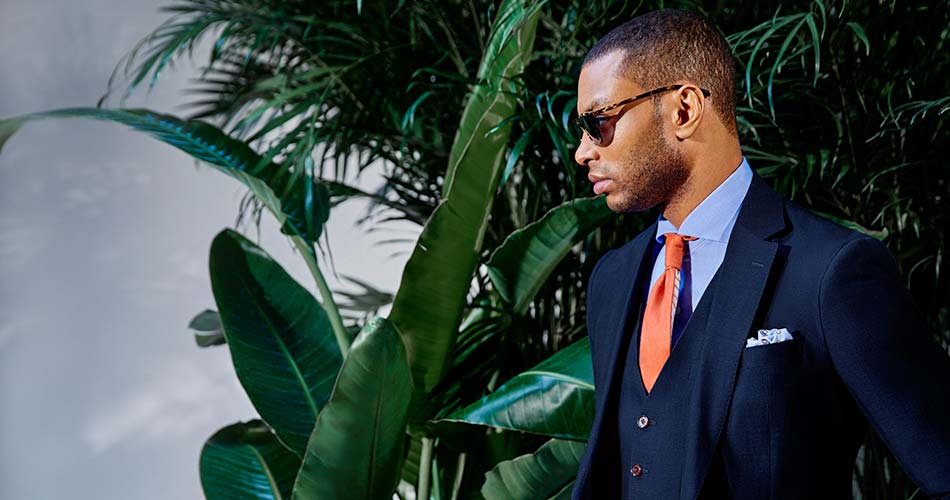 First, let’s address an important question, can you wear a linen suit to work? There’s some debate about linen’s place in the office, but we say go forth and conquer the boardroom in your finest flax fiber. This can be tricky, but there are simple ways to make your linen suit office-appropriate — here’s how.

But enough about the workplace; linen suits can be worn in many other places that are a bit less dreadful. The penultimate situation to wear a linen suit pertains best to one thing: making you look like Jay Gatsby’s better-dressed brother at a summer wedding. It’s true, wearing linen suits at a wedding is a killer style move. Nothing says “I’m ready to stand outside in 90-degree heat but still look better than most of the crowd” quite like a well-fitted linen suit. It’s a show of sheer sartorial superiority.

Besides attending a wedding in one, linen suits are best dressed down. Whether it’s a cocktail party, country club outing, Sunday brunch, you have the green light to wear your linen suit with an open collar dress shirt or even a polo or short sleeved tee.

For those looking to take their linen suit to the office, styling a linen suit calls for a certain kind of charming effortlessness. Because linen sits at the casual end of the fabric spectrum, it pairs best with pieces that aren’t too formal. For example, laced Oxfords or boots might weigh linen down and look out of place, but loafers, drivers or upscale monochromatic sneakers can match linen’s relaxed sensibility. Apply the same principle to your dress shirt, your tie, and any other accessories. Let our intro to casual suit essentials be your guide for an office-ready look.

For everyone else, you can show some personality with your linen suit. It’s easy to get bogged down in dress codes and traditional notions of menswear etiquette, but style is also meant to be fun – and linen suits practically exude fun from every seam. This is easily done, especially since linen suits can be broken down so easily. So allow yourself to take risks and be lighthearted. Rock the blazer with chinos. Skip the tie. Ditch the socks. Try out pastels. Linen suits accommodate creativity well, as long as you don’t overdo it and wind up in costume territory.

How To Care For A Linen Suit

Now that you know how to look good wearing a linen suit, you need to be sure to take proper care of it. Linen gets a bad rap for being difficult to care for, but don’t let its reputation deter you. Often, it’s not the linen suit that’s in the wrong, it’s improper care on the part of the wearer. Now we’re not saying you would ever commit the following mistakes, but if you do, take these next two points to heart.

1. Invest in a Steamer

Okay, wrinkles are going to happen, but what if you want to mitigate them? This is where a steamer comes in handy. Simply hang up your suit and give it a gentle steam when you feel like the wrinkles are too much. Be careful – steaming can damage any suit if done improperly, so make sure to set it to “low” and ensure you’re not pressing against the fabric directly. Steam only areas with pronounced wrinkles – like the armholes, elbows, crotch and knee areas.

This is true for any suit, but linen suits tend to go through dry cleaner abuse more often than others. Why? Because yes, as we said, it’s prone to wrinkling, but that doesn’t mean it’s time to take it in for a clean. It doesn’t matter how carefully you walk, sit, dance or cross your legs. You could spend the whole day playing dead and by the evening your linen suit would have crinkles. Your linen suit will probably even take on a few wrinkles on the way home from the dry cleaners. Accept that it will never be wrinkle free. Just like our advice on how to care for your suits, we recommend you dry clean a maximum of two times a year when the suit gets visibly dirty or emits an odor.

A final note on linen suit care: Please, whatever reason you may have, do not iron your linen suit. If done improperly at home, you run the risk of damaging your suit fabric permanently. Opt for the steamer, you’ll be glad you did.

If you’ve made it this far, then we hope you’re properly excited to wear (or acquire) a linen suit. Go on and embrace linen in all its cool, lightweight, wrinkle-prone glory. Do you have any questions about living your best life in linens? Drop a comment below and we will get back to you as soon as possible with an answer.

One thought on “How to Wear and Care for Linen Suits”