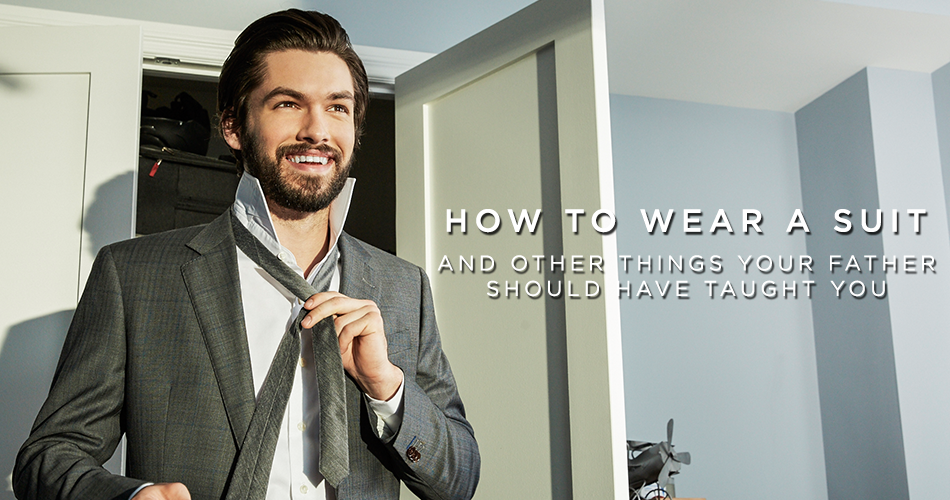 The little things our dads teach us—like how to wear a suit the right way—can pay off big. Have you mastered these 5 man skills?

The guy on the left is doing it wrong. Can you see how?

You’d think that anyone who can dress themselves would know how to wear a suit. Hop into a pair of slacks and shrug on the matching jacket and you’re done right? Not so fast. Tailored clothes like suits, blazers and dress slacks each have their own unique set of rules. And you’d be surprised at how many guys don’t understand those rules. Case in point: look at the epidemic of men buttoning the bottom button on a 2-button suit jacket. That’s a dead giveaway that a guy doesn’t know how to wear a suit. You see it everywhere, even on the red carpet. Hollywood OGs like Cary Grant knew how to wear a suit. We’d bet even while rolling over in his grave over this affront to style, he’s got that lower button open.

The rules of how to wear a suit are pretty specific but they’re also extremely simple. Be sure to wear the pants high. Dress pants aren’t cut to be worn like a pair of low-rise jeans, yet many young men wear them down around their hips. The result is, among other things, an extra long pant leg that puddles at their feet and that’s bad news.

Next comes the jacket. As we said above, buttoning the bottom button is a no-no. But a gentleman should always keep the top button on a two-button suit buttoned when he’s standing. Following this menswear rule keeps men from looking sloppy with jacket panels flapping in the wind when they’re standing. Just unbutton it when seated or it’ll cause too much strain on the jacket’s mid-section. There are, of course, tons of other more nuanced things to do to look your best when wearing a suit, but these are the basic rules of how to wear a suit that all dads should teach their sons.

#2 How to get a proper shave

Dad didn’t need 150 blades to get a good shave and neither do you.

Every man ought to be able to get a good clean shave. When that first patch of peach fuzz arrives, many young guys are eager to grow some hair on their faces and show off their newfound maturity. With hormones raging, teenage boys are looking for any edge to make them look more strong and virile. That’s when dad steps in with his razor know-how.

The mark of a man isn’t that he can grow hair on his face, but that he knows how to tame the hair on his face. The young gent who can trim, shape and shave his facial hair into submission will have the true advantage as he can change up his look to suit his evolving style.

We’re big fans of the traditional wet shave with a double-edge safety razor. Too many dads phone it in and start their sons off with electric razors. Just as learning to drive on an automatic only makes a stick shift more intimidating, learning to shave by rubbing your face with a bunch of mini-clippers can make wet shaving seem much trickier than it is.

The basics are simple, though. We laid them out for you along with all of the best tools you can find to get a great shave.

Even if you rarely wear ties, you should know how to tie a basic tie knot.

Even if they avoid wearing ties, men should know at least one good tie knot. Period. The HBO comedy Silicon Valley perfectly summed up why in the scene where Richard, the show’s protagonist and founder of a tech startup, is being sued. In the scene, Richard is in the courthouse bathroom trying, and failing, to tie his tie. His nemesis, the guy who’s suing him, walks in, sees him struggling, takes the tie from him and expertly knots it around Richard’s neck. It was the ultimate power move. We’d say something like “Don’t be Richard.” but he’s also the founder of a soon-to-be startup success so let’s just say Richard’s dad owes him one for not teaching him this life skill.

There are hundreds of tie knots, from the run of the mill to the extreme. And we’ve given advice on which tie knot works for you, but the most versatile and most useful knot to know is the four-in-hand knot. Thankfully, it’s also one of the easiest knots to tie well. Here’s a quick refresher if you’ve been bare-necked for too long.

#4 How to shine shoes

Nothing smells manlier than leather and shoe polish.

We all know that a pair of scuffed up kicks can kill an otherwise strong outfit. But there’s an even more essential reason every dad should teach his son to shine his shoes. Knowing how to take care of your stuff is an essential part of manhood. True, you could go to a shoe shine stand every time you wanted to sharpen up your look. We all do it on occasion. But you should also know how to keep your own shoes looking good without having to sit there and pretend to read a newspaper while someone else does it for you. Aside from taking responsibility for your own style, a proper home shine will condition the leather and prolong the life of your shoes.

There are a few different ways to shine your shoes. Some give their shoes a quick once over, others go through a multi-step process that includes applying layers and allowing them to dry for up to an hour. Most dads teach their sons something in the middle of these two extremes, like the five-step process we laid out a while back. If you’re looking for a refresher course, give this method a try. Make it a habit and you’ll be leaving scuff city for good.

Maybe dad didn’t meet mom by holding a door for her, but it didn’t hurt his chances.

But it doesn’t need to be a stern-faced, serious talk. A chilled out conversation about respect for women can grow out of talking about how to attract one. See below.

This topic is much bigger than we could possibly hope to sum up here, but there are some basics that every dad ought to teach his son. For one, don’t let chivalry die on your watch. Hold a door, for crying out loud. As we highlighted in our story on five ways to become more attractive, a guy can be dressed to the nines and still look like a douche if he can’t be bothered to do something as simple and courteous as hold a door. Note: holding a door for dudes is nice too. Maybe you should just be a mensch and hold doors for everybody.

And maybe your dad doesn’t have to teach you this but, we thought we’d throw in a life skill we wish more dads would teach their sons: the lost art of buying a lady a drink. If you haven’t gotten the memo, pick up lines are dead. Sending a drink over is still a strong way to start a conversation. Maybe that conversation leads to more. Maybe she’s the one. Maybe someday you’ll be checking this list to see if you’re passing on the right lessons to junior. You never know.

A father’s advice can’t be summed up in one article. What else did your dad teach you that you think everyone else should know? Give your dad a shout out by leaving a comment below.