The Compass  /  (Renaissance Man)ual  /  How to Carve a Turkey

How to Carve a Turkey 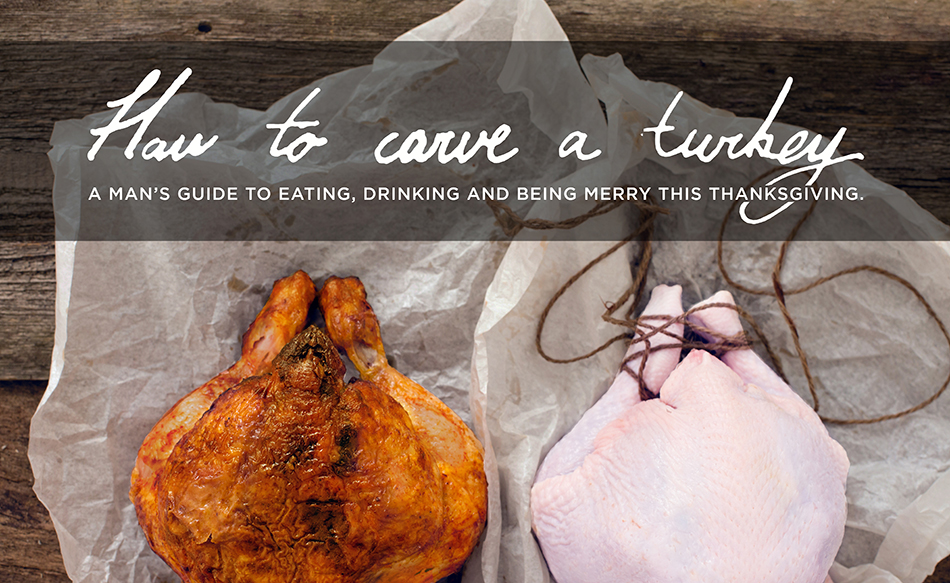 Thanksgiving is a man’s holiday. The emphasis on heavy eating (something many men, but few women, will admit to loving) and the timing (in the heart of both college and pro football’s regular seasons), conspire to make this one of our favorite days of the year. It’s always been this way. The only written eyewitness account of the first Thanksgiving tells us that it was an all-male event. The first Thanksgiving was like one big guys’ night out. (Well, “guys’ nights out.” The original celebration lasted three days.) Women were only allowed on site to cook. Thankfully, we have made plenty of progress when it comes to gender equality. That doesn’t mean that we’ve thrown away all traditional gender roles, though. Men are still expected to carve the turkey at Thanksgiving. Here’s how to do it in six easy steps:

Step One: Let it cool.

Aside from avoiding burning your hand on a piping hot turkey, there are other reasons to let it cool off before you cut it up. The juices need to redistribute throughout the meat. Carving a hot turkey will allow those juices to escape and you’ll end up with a dry, tough bird.

Slicing a thin piece of the turkey breast at the table will look like something straight out of Norman Rockwell painting. Unfortunately, it’s an inefficient way to carve the bird. Still, you should do it, if only just for show. Cut a very small slice into the breast at the table. Let the diners ooh and ahh, then take the bird into the kitchen and do your handiwork on a cutting board parked firmly on the counter.

Next, pull the wing away from the body and you’ll see a V-shape. Use your knife to separate the joint that connects the two parts of the V. Leave the drumette section of the wing attached to the body.

The turkey breast is the part everybody admires at the table, so presentation is key. Starting at the center of the bird, cut one side of the breast away from the bone in one piece. Do this by sliding the knife while gently pulling the meat away. Once separated, slice the breast into portions by cutting against the grain (look for the small lines in the meat and cut slices perpendicular to those lines).

Arrange the meat on a platter so that it’s easy to see what’s what. We like to keep the drumsticks and the wings on the sides and run the sliced breast and thigh meat down the middle of the platter.

Now, gentlemen, let us eat, drink and be merry. 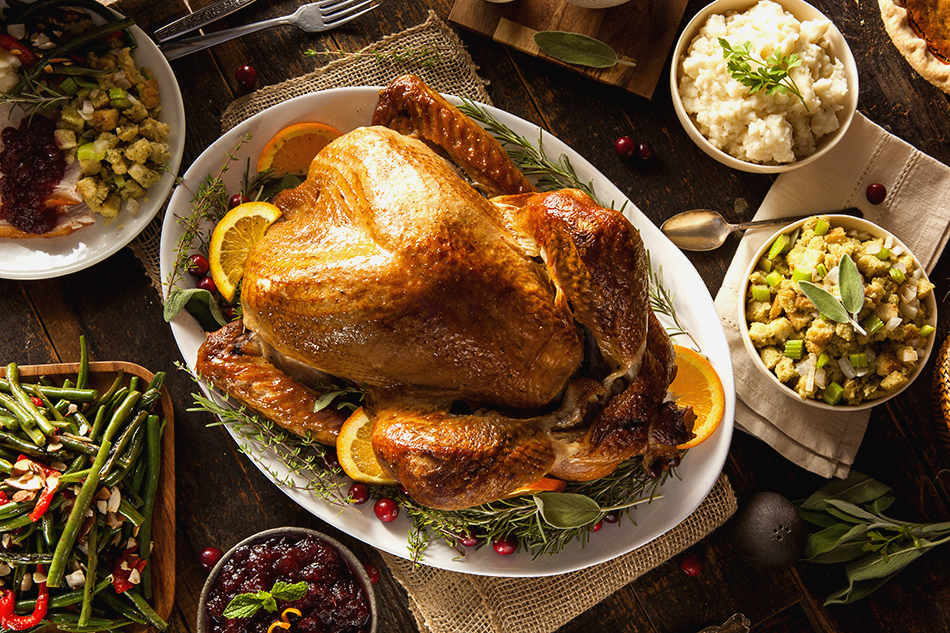 As the only holiday to get its nickname from its main dish, Turkey Day is a foodie’s delight. Whether you are cooking up a feast or enjoying the fruits of someone else’s culinary labor, eating well is central to enjoying Thanksgiving. No other holiday celebrates indulgence quite like this one.
Still, as a custom clothing maker, we know a few things about the problems that can associated with overindulgence. As the temps drop, the weights rise. Those suits that fit flawlessly in the summer start to bulge in the stomach and waist as men pack on the pounds and push the idea of a slim fit suit to the limit.

Take heart, man. There are plenty of good Thanksgiving eats that won’t make you blow up like a float in the Macy’s parade. Eating like a participant in the original Thanksgiving is a great start. While not exactly paleolithic, the men of the original 1621 Thanksgiving did eat much closer to a paleo diet than most men do today. Carbs were in short supply. There were no sweet potato casseroles with the marshmallows on them at the original Thanksgiving. Nor were there pumpkin pies (though they may have eaten some pumpkins) or sweet cranberry sauces (people didn’t start sweetening cranberries until maple syrup made the scene some six decades later). Incidentally, according to most food historians, turkey was probably not on the menu either but that’s a whole different ball of wax.
Stick with the original Thanksgiving fare and feast on what the Massachusetts locals would have been eating in the fall of 1621: lobsters, clams, oysters, cod, onions, turnips and plenty of greens like spinach and chard. It may set you back a few bucks, but you will get plenty more invitations to Thanksgiving dinners if you arrive with some fresh, succulent lobster tails for the other diners. Feasting on fish and fowl and an array of fresh seasonal vegetables will make you feel full without filling your arteries and without you “filling out your suits” too much.

Thanksgiving goes hand-in-hand with catching up with old friends and family. It also means a day or two off from work. Put those together and the drinks start flowing. And it’s only fitting that the most culinary of holidays is also one of the booziest. Traditionally, the Wednesday before Thanksgiving is a big day for liquor stores and bars. What are they selling? More of the same stuff they always sell. But this is the time to try something special.

As for the Thanksgiving meal itself, nothing says “It’s a celebration!” like popping the cork off a bottle of Champagne. You can’t go wrong with Champagne at Thanksgiving dinner, but if you’re like most guys, you could use a little help in figuring out your options. We say pair the meal with a hearty Champagne like the Dom Ruinart we highlighted in the Compass Champagne Guide. And if you’re hosting, there’s something really classy about greeting your guests with a glass of bubbly that you can keep filling throughout the night. 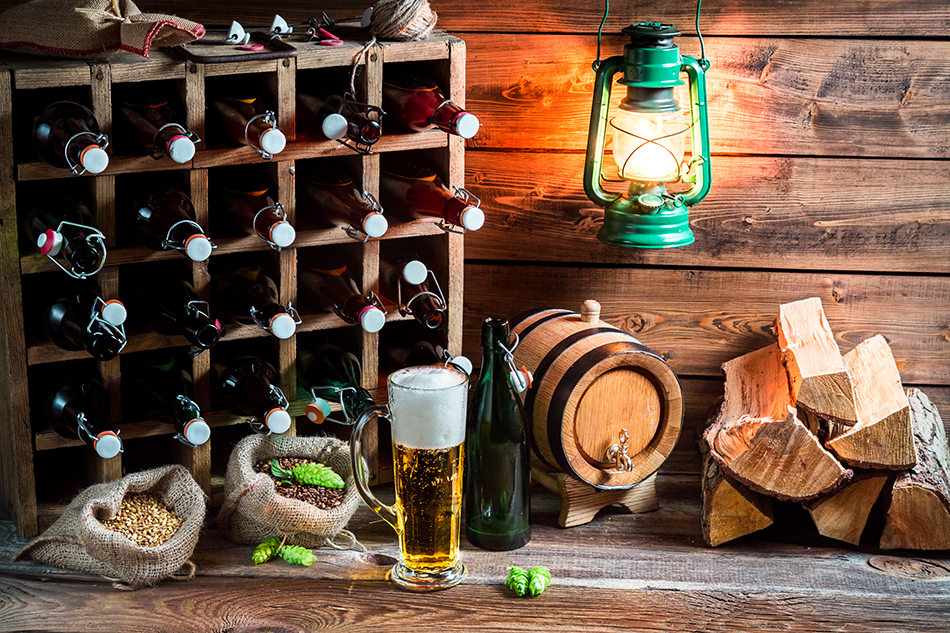 This last bit about being merry that rounds out the old saying, doesn’t just mean enjoy yourself. The word merry has its roots in the old German word for short, as in “lasting a short time, seeming brief.” In other words, be someone in whose company time flies. That’s a tall order, but it’s one that a modern gentleman ought to strive to reach.This Thanksgiving, don’t forget to be thankful for the merry people in your life. Enjoy the time with them, however brief it may be. 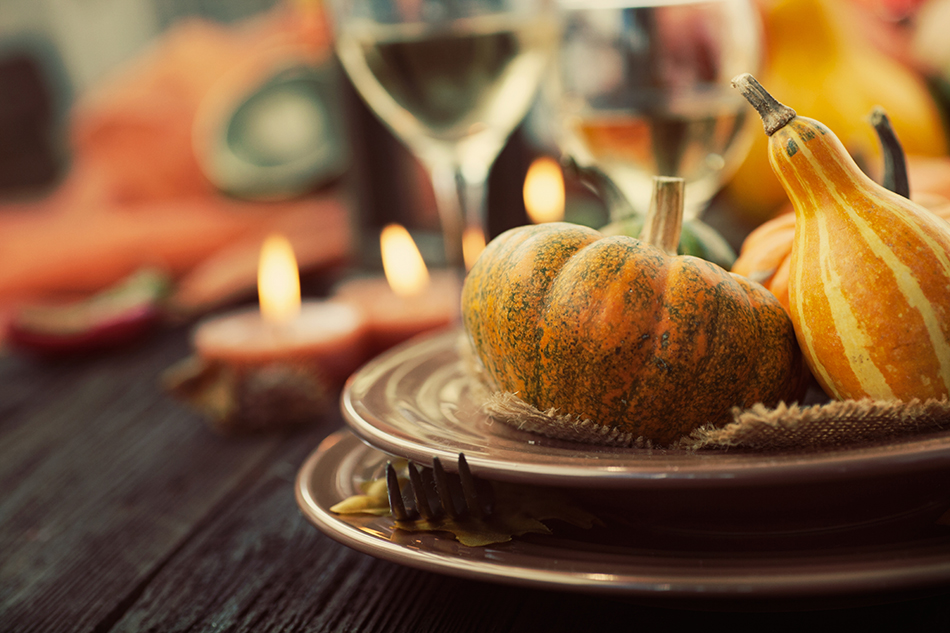 Tell us what are you thankful for this year? Leave a comment below.

2 thoughts on “How to Carve a Turkey”