The Compass  /  Style  /  British vs. American vs. Italian Suits

British vs. American vs. Italian Suits

No matter where you live, style and what is considered stylish is always evolving. It’s constantly being shaped and informed by a mix of media, history, and the clash of the fashion avant-garde against tradition.

When it comes to suits and how distinct styles have evolved, geographical influences have perhaps played the largest role. Regions and countries have always developed unique styles of dress from the culmination of the natural resources, values, and culture of its people.

Modern suit styles are no different, and even today, regions around the world have their own unique takes on the common suit and how it’s worn. This doesn’t mean any region’s suit style is better (though each region may claim otherwise and we certainly have our preferences – stick around until the end), rather, it shows the dynamic nature and rich detail behind the simple yet powerful suit.

To show you exactly what we mean, let’s run through a small exercise.

If the names weren’t obvious, these three sets of men represent the three iconic suit styles we’re going to dive into today: British suits, American suits, and Italian suits, respectively. At first glance, you might not be able to tell the subtle differences between them and the attitudes they all represent, we wouldn’t blame you. If you think you nailed all the differences boasting, that was way too easy, we’d place a friendly wager you didn’t. To both parties involved, read on.

Being stylish takes work.
We can help with that.

Stay in the know with style tips, how-to's, and so much more with our weekly newsletter.

The British or English suit style can trace its origins to one of menswear’s most hallowed grounds: Savile Row. This famous London street is just about synonymous with bespoke tailoring, thanks in large part to the innovative designs of one of its legendary tailoring houses, Henry Poole.

Henry Poole, its eponymous founder, served countless members of high society in his day, but perhaps his most famous client was the Prince of Wales (Edward VII) who, in 1860, commissioned a short, tailless evening jacket to wear at informal dinner parties. That was history’s first tailless dinner jacket and the modern tuxedo can trace its mysterious lineage directly to this moment. The tailless jacket style and its countless descendants, went on to change menswear in Britain and throughout the world. 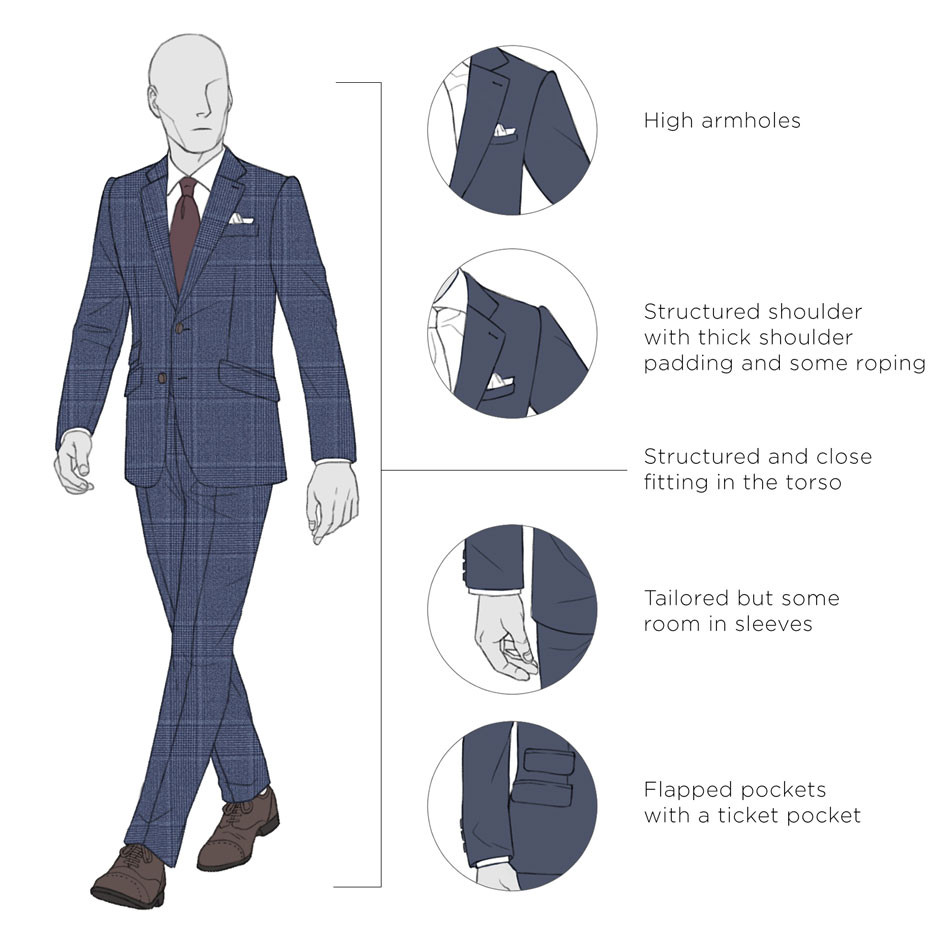 To understand the construction of modern British suits today, it’s important to note that historically, British suits were meant to signify social status and were originally made to be worn by military elites and British nobility. This backstory is why British suits are highly structured and close-fitting, as this stiffness was the requisite standard of formality. Elements of British suits continue to follow this pattern.

The suit jackets are known for having defined shoulders with thick shoulder pads, narrow sleeves with high armholes and surgeon’s cuffs (functional sleeve buttons), and a stiff canvas. The front of the British suit jacket is often adorned with a ticket pocket, while the back is distinguished by a double vent. The British suit fit is tailored close to the body with a tapered waist. As you can see, every detail of the British suit emphasizes structure and concise tailoring.

On the bottom, British suit pants take a comfortable middle-of-the-road stance — not too tight, not too loose. The pants are slim with a high waist and pleats, and usually worn with a quarter or half break.

British suits are characterized by their tailoring foundations, thus, they resemble a classic, understated and handsomely structured look. While it’s no longer ground-breaking as it was in Poole’s day, it’s not stuffy or dated and still lands many a man on the best-dressed list. A British suit has the ability to project authority and attention to detail. Wear it to work, wear it to a wedding, wear it to a fancy venue on the weekend – you’d be hard-pressed to find anywhere a British suit won’t serve you well when a suit is the expected dress code.

The American suit style traces its origins back to the 1920s, a prosperous, roaring time when American economic power was ascendant. This is thanks to the expansive economic boom from the ongoing industrialization of the decade. During this period, two major things happened that facilitated the spread of suiting across America:

While number one does address the increasing buying power of many Americans at the time, the second point is arguably more impactful as it significantly lowered the cost of producing a suit and made it more attainable. This furthered demand, and eventually Brooks Brothers delivered the most iconic suit of the era – the sack suit. The sack suit quickly became the unofficial calling card of America’s businessmen and the preppy Ivy League set.

Contrary to popular belief, the sack suit had its name derived from a French garment made popular in the 1840s, the saque coat. This garment was different because unlike other pieces of formalwear constructed from four pieces, the saque coat was made from two. Fast forward to 1920s America, and the sack suit was made to be constructed from two pieces just the same, thus, the name was born. Another large part of its success is attributed to the fact that its looser fit accommodated more varied body types and was easier to mass-produce and sell off-the-rack. 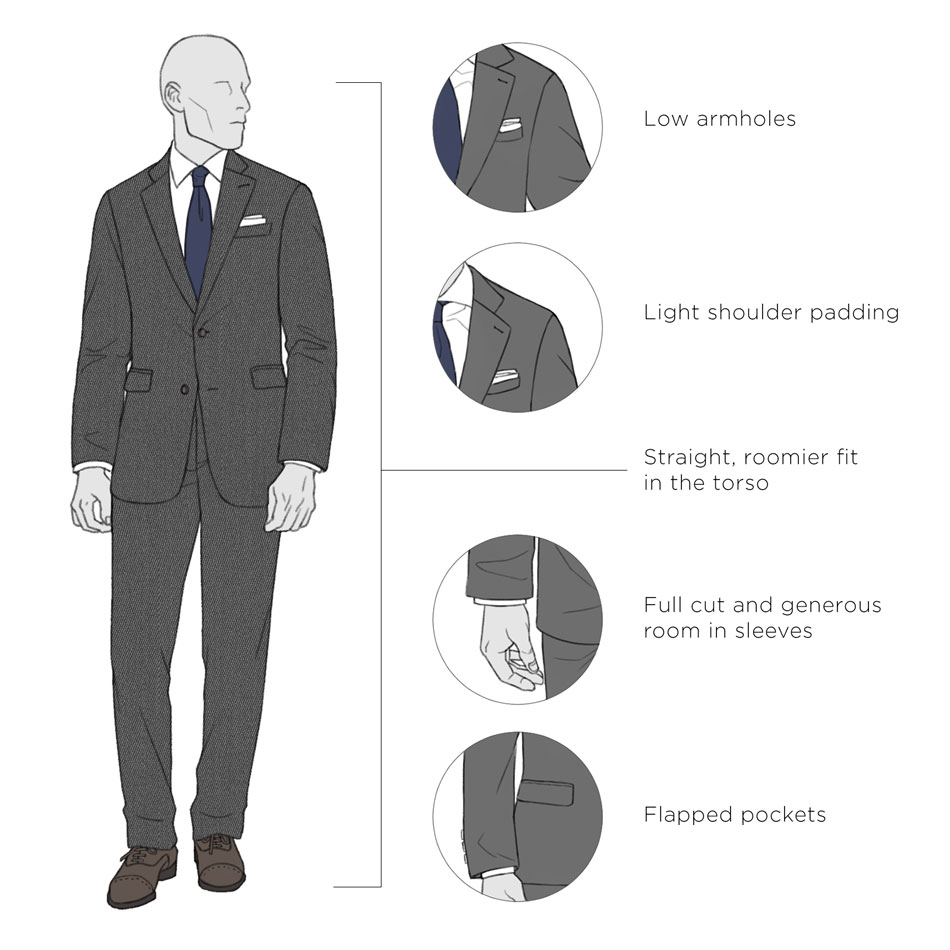 Today, American suit styles still follow some of the same distinguishing features of the sack suit. They are characterized by their straighter, looser fit and soft silhouette that pairs with light shoulder pads, loose sleeves, low armholes, no darts and a near-universal single-breasted jacket with a single vent.

The dress pants of American suits feature a full cut and no pleats. This generosity of fabric extends to the ankles, where you’re likely to see a full break (or, in all too many scenarios, a puddle). From top to bottom, the defining details of the American suit reflect retailers’ adoption of large-scale production methods for their clothing.

Who is the man in an American suit? In the pros column, he is likely more comfortable than his British or Italian suit-wearing colleagues who wear trimmer fits. An American suit offers plenty of room to breathe. In the cons column, he risks looking baggy, shapeless, and unkempt. It’s called the “sack” suit, after all. This is furthered by the fact that American suits have little room for individuality due to their mass-produced nature. Though there are men who get it right (and you can fix many things via alterations, the American suit is often seen as the least stylish and most dated of the three styles.

And now we return to Europe, this time to say ciao to the Italian suit. Italian suit style hit its stride in the 1950s when the first fashion show held at the Palazzo Pitti showcased the Italian suit for the first time. The venerated fashion house Brioni is widely credited as originating the Italian tailoring style when they debuted their “Roman Style” suit in 1952. Actor Gregory Peck sent the look worldwide when he wore Brioni suits in the 1953 movie Roman Holiday. Some of the most recognizable fabric mills and fashion houses are Italian and it should come as no surprise that Italian suits have maintained their popularity in Europe and across the world today. 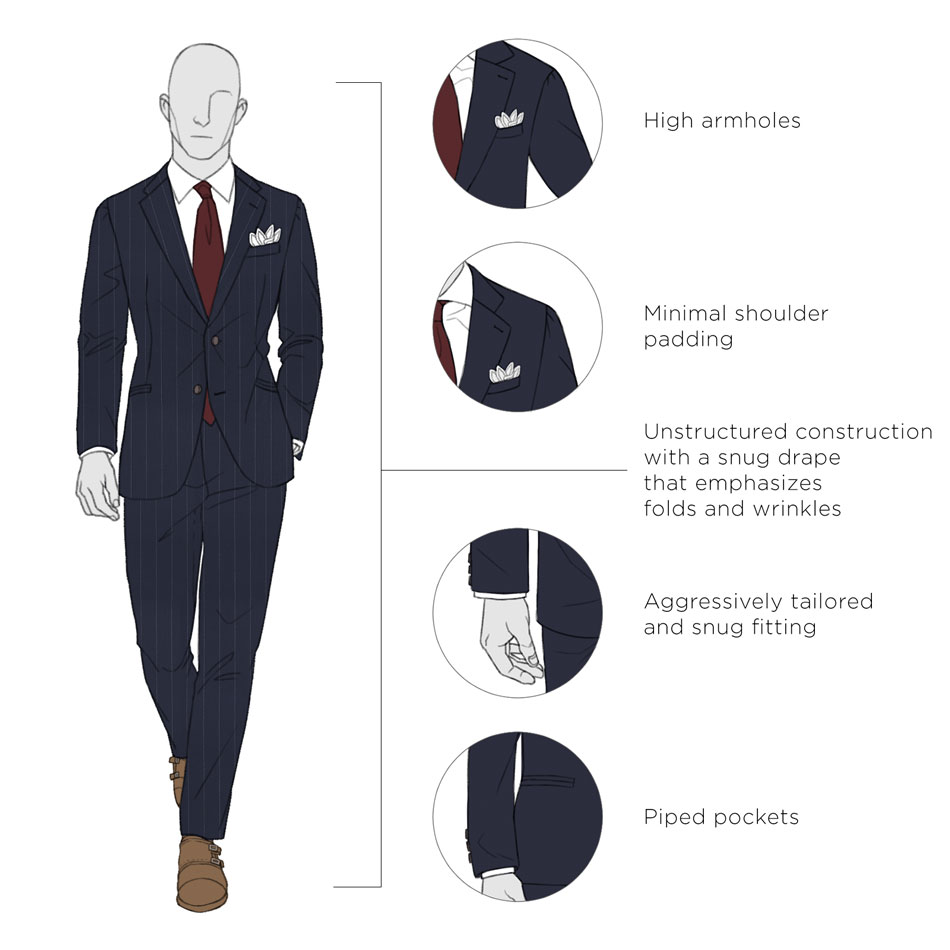 Italy’s notorious obsession with all things beautiful resulted in a suit style that prioritizes silhouette aesthetics and lightness (literally, the weight of the garment) over all else. Italian suits are first and foremost lightweight. This is in some part due to the suit canvas and cloth are light to match the balmy Mediterranean weather and the Italians’ penchant for sprezzatura, the art of studied carelessness or nonchalant style.

Italian suits are also highly tailored and fit tight and close to the body with a tapered waist, high armholes, and very little shoulder padding. The less-structured jacket allows the cloth to follow the natural silhouette of the body, which represents a sleeker and albeit a more wrinkled look that defines Italian suiting. Italian suits also feature a tight V-shape found at the front of the suit jacket at the waist. As far as finishing touches, Italian suits come two/three-buttoned (with buttons placed higher), single and often double-breasted with flapless, piped pockets.

The pants of Italian tailoring follow suit (get it?). They are fitted through the hips, with slim legs that end in little or no break, continuing the refined, fitted Italian theme.

Italian suits, much like the men who wear them, represent their flair, flamboyant nature, and aesthetic value. They tend to be less stiff and structured than their British alternatives and more fashion-conscious than their American alternatives. Though an Italian suit might look out of place in a conservative work environment, it will shine at an occasion that calls for a little extra flair. The Italian suit wearer is effortlessly stylish and fashion-forward.

Create Your Own Style 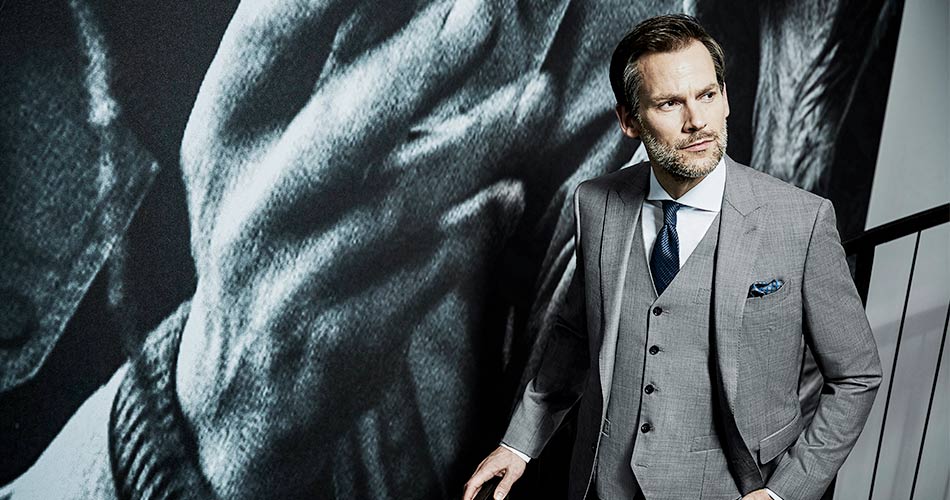 Now that you’ve read up on your modern suit style geography, you can take the elements you liked from other regions along with you. We did, which is why Black Lapel suits can be made with customization options such as double-vents, jetted pockets, and pleated pants! So, what do you like about British, American, and Italian suits? Leave a comment below!

3 thoughts on “British vs. American vs. Italian Suits”